Amphibian populations have undergone rapid, global declines and extinctions in recent decades. Over 30% of all amphibian species are now considered threatened and as many as 122 species have recently become extinct. In many cases declines can be attributed to threats amphibians share with other groups, including habitat destruction and fragmentation, introduction of predators and competitors, exploitation by humans, and global climate change. However, some of the declines and extinctions of amphibian species have been caused by the fungal pathogen (Bd). In some areas, like Central America and Australia, Bd epidemics moved so quickly across the landscape and threatened so many little-known and endemic species with extinction that the only viable conservation strategy was to bring animals into captivity and establish assurance colonies, in hopes that they would one day be able to be successfully reintroduced into their native habitat.

Our work has contributed to the global amphibian conservation effort on a number of fronts. Work during Dr. Richards-Zawacki’s PhD helped to understand the natural history of three little-known, yet critically endangered species that were being maintained in captivity due to the destruction of their habitat (the Kihansi Spray Toad, Nectophrynoides asperginis; Arch et al. 2011) or the arrival of Bd (Panamanian golden frogs, Atelopus varius and A. zeteki; Zippel et al. 2006, Richards & Knowles 2007). Our more recent work has included the development of techniques to improve the health and reproductive success of captive amphibians (Dugas et al. 2013), including methods for treating Bd infections in captive animals. Our heat treatment (Chatfield and Richards-Zawacki 2011) and low-dose itraconazole treatment (Brannelly et al. 2012) protocols have been adopted by zoos, aquariums, and amphibian rescue facilities, where they have helped to reduce mortality rates among amphibians being treated for Bd (which often, unfortunately, includes animals of critical conservation importance). 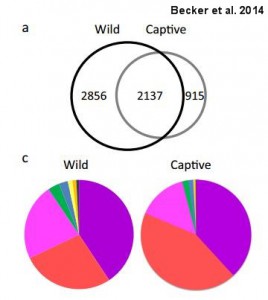 Work in our lab has also begun to address issues related to the reintroduction of captive animals to the wild. For example, the skin of amphibians is host to a diverse bacterial community and some of these microbes are symbiotic, playing an important role in host health, and specifically, defense against Bd. We characterized the skin microbiomes of wild and F1 captive A. zeteki, a species that may be extinct in the wild but that is being maintained in captivity. We found that the offspring of wild frogs, which were born in, and had been raised in captivity for eight years, still shared 70% of their microbial community with wild frogs (Becker et al. 2014). This is promising, as it suggests that microbial symbiotic relationships, some of which are important to the ecology of wild animals, can be maintained and passed from generation to generation during captive management.